Chaplin & the Battle of Petroushka 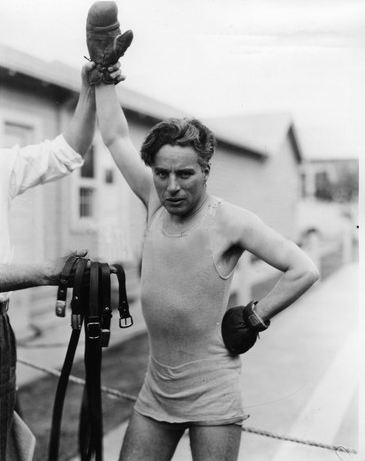 "Long years of practice at dodging custard pies and various other missiles stood Charlie Chaplin in good stead Sunday night at the Petroushka Cafe, in Hollywood, when two men attempted to 'beat up' the famous film comedian." 1


A little after midnight,  C.C. Julian, president of the Julian Petroleum Corporation, arrived with a large party consisting of his brother, his secretary, and two women: actress Peggy Browne and her friend, none other than Chaplin's ex-wife, Mildred Harris. Browne and Harris had joined the party earlier in the evening at the Montmartre, which was just down the street, and followed the group to Petroushka. Browne said later that she and Mildred were "unescorted." 2

Chaplin saw the group walk in but did not see his ex-wife. "I didn't know Miss Harris was in the cafe...I noticed the party when it entered, however. One of the men was acting very rudely; he kicked over a floor lamp and cursed loudly."3


Russian actor Nicholas Dunaew, who was seated at an adjoining table, recalled what happened next: "Mr. Julian brushed roughly against Mr. Chaplin. Mr. Chaplin said: 'Please be careful there are ladies present.' Mr. Julian replied: 'Who are you telling to be careful?' and then struck Mr. Chaplin across the face. Mr. Chaplin got up and struck back knocking Julian down. When Mr. Julian stood up and squared off I hit him on the jaw and knocked him down again as other members of his party were getting into the fight." 4

"Mr. Chaplin  behaved in a thoroughly gentlemanly manner, "said Nat Arlock, manager of Café Petroushka. "His party was quiet and inoffensive. I could ask for no guests more cultured. I saw the entire proceedings and I am embarrassed that it should have occurred in my place which is a genteel establishment. I do not allow liquor in the rooms or rowdies.

"Mr. Chaplin was listening to the music," Arlock explained. "He is very fond of Russian music. Zamulenko, the Moscow violinist was playing...Mr. Julian was the instigator of the trouble.  Prior to striking Mr. Chaplin he had knocked over a projecting light. During the fight, a cello was broken." Arlock said that Mr Julian had given him a check to pay for dinner and all the damages, even though Julian would later claim that he wasn't present at the cafe at the time of the fight. However employees and other witnesses, including members of Julian's own party, identified him as the man who attacked Chaplin.5

Several newspapers reported that Chaplin received a black eye or a bloodied face in the brawl, but witnesses say he "escaped without a scratch." 6

Mildred Harris, who fled with her friend, Peggy Browne, during the uproar, later expressed regret over the incident. "Poor Charlie, I do hope that my presence there will not be misunderstood. I did not know Charlie was there and I am sure he didn't see me.

"Charlie and I are perfectly good friends. Reports that the trouble started through a quarrel over me are preposterous. As a matter of fact I personally was not with Julian. I merely happened to be with my girlfriend who was a member of the party. Charlie is very sensitive. I sympathize with him deeply in this affair because I know how dreadful it all must be to him." 7

According to Browne, Julian had been stewing about Chaplin from the moment he arrived at Petroushka. "All during the party, Julian made scathing remarks about Mr. Chaplin. Miss Harris urged him to discontinue his uncomplimentary utterances and when he refused a moment before the trouble started, she left the table. As soon as I saw something was going to happen I became so frightened I ran down the stairs to get away. I didn't see any blows struck." 8

Chaplin had initially wanted to press charges against Julian but later changed his mind. "I have nothing  more to say about the unpleasant affair. I shall forget it." 9

"I'm not a fighter," Chaplin said, "not a braggart of fistic prowess as has been reported. I have always endeavored to conduct myself  as a gentleman, and appeal to the press and public that my part in the affair was forced on me, and I did only what any red-blooded man would have done had he been in my place." 10

I thought some of the headlines about this incident were a hoot. Here are a few:

All images from Chaplin films made from 1918 onwards, Copyright © Roy Export S.A.S